The design of this weapon belongs to Insomniac Games and Sony Computer Entertainment. I only claim ownership of the mesh and textures.

I’m a huge fan of the Ratchet & Clank series and this is first of several models I’m building to recreate a scene from the feature film. The OmniWrench Millennium 12 is Ratchet’s trusty melee-weapon and go-to tool whenever there’s a comically oversized bolt that needs turning.

In the Playstation 3 title “Ratchet & Clank: Quest For Booty” this weapon made its debut at just over 2000 triangles using one 512×512 texture set. I’d like to think my model would fit comfortably in the Playstation 4 remaster at 3,300 triangles and closely matching the art style. The series typically makes use of oversized proportions, clean surface details that aren’t too busy and semi-realistic materials. If this model were actually in-game the texture resolution would undoubtedly be lower than the 4K ones on display here, probably 1K when considering the size of the asset on screen. I’ve put some screenshots below showing how the texture scales with diminishing resolutions. 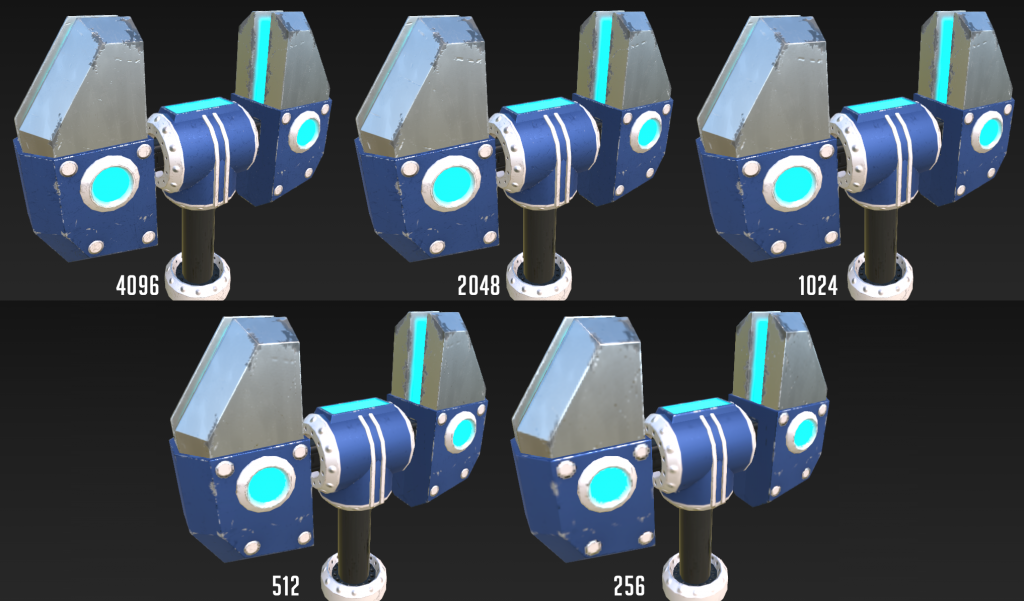 I tried a slightly different method making the high poly this time around. Some parts were made using edge loops and subdivision, and others used smoothing groups and chamfer modifiers to add subtle smoothing to hard edges. When it came to unwrapping and baking this model I looked back at some of the problems I encountered with the P90. One of the most significant problems was high-poly details were being skewed on flat low-poly surfaces. This was caused by the “Average Normals” setting which helps eliminate hard seams by, as it implies, averaging the normals. This is great for curves but bad for flat surfaces as details become skewed.

I’d heard that Marmoset Toolbag has a Skew Brush which easily fixes such problems. A quick demo convinced me to give it a try and I’m pleased to say it works as advertised!  I wish I had known about this when baking the P90. I spent hours trying to correct this problem manually!
Overall I’m extremely happy with how this model turned out and I’m eager to see how the next Ratchet & Clank asset turns out!